Ur ALMOST ALL ABOUT EWA:
Andy Warhol

In 1970 I was having dinner with some friends at La Coupole in Montparnasse when Andy Warhol and his retinue turned up. He was frighteningly pale and colourless with his silver-grey hair, reminiscent of a spectre. The picture has etched itself into my memory. A few weeks later we met again, at a reception at Yves Saint Laurent´s. Andy was calm, unobtrusive and friendly. He was in Paris to film L´Amour under the direction of Paul Morrissey who created most of Andy´s films. I told him that I dreamed of making a film myself and that I would love to be present while they were filming to learn the trade. I also hoped to be able to get a picture story for GAMMA, my agency at that time.

“You don´t need to learn”, Andy replied. “You already have the skills.” I can see that in your photographs. Just get started.” He introduced me to Fred Hughes, the producer, who said: “Don´t call us. We´ll call you.” Days passed. No one rang. Then I thought of a way of reminding them of my existence. Telegram. “You didn´t call!” The next day Fred rang. “Come as soon as you can.” I was present while the rest of this strange and bewildering film was being made.

There were two problem children: Jane Forth and Dona Jordan. Two striking models from Brooklyn who constantly turned their back on me when I tried to shoot them. I never succeeded in catching their faces and my reportage was worthless if it didn´t include Andy´s ´superstars´.

My husband Claude Duthuit was a nephew of Henri Matisse. We took over Matisse´s old house in Issy-les-Moulineaux on the outskirts of Paris. To celebrate Claude´s fortieth birthday I organized my life´s greatest party, inviting all my favourites from parisian cultural scene. Peter Brook´s and Andy Warhol´s retinue were there. Fred asked if I was satisfied with my photos from the shooting. I was, with the exception of the vexatious fashion models. Fred called the naughty girls. “Now you will pose for Ewa, where and when it suits her.” The next day four actors came – meek as little lambs – and posed for me in my antique, gilded Venetian four-poster bed which had been Matisse´s bed.

I had taken a few shots of Andy, but I didn´t want to disturb the filming with the complex image that I had in mind. Five years elapsed before I had another opportunity. Andy Warhol came to Stockholm for an exhibition. I had an exhibition of my photos the same day as his opening. I went to meet Andy at his gallery. “For years I have been thinking about your portrait. Can we finally do it now?” “OK”, Andy replied. “I have a business lunch. Then I´ll come to your exhibition”. He brought a dozen people with him to Galleri Medmera. The February afternoon scarce daylight was rapidly disappearing. I improvised a studio at Bellmansgatan and I nailed a sheepskin as a background. It was brave of Andy, a hypochondriac suffering from a cold, to pose with no coat in the depths of the Swedish winter. To emphasize Andy´s wraithlike existence I dressed him in my father-in-law´s white Scottish seaman´s pullover. When he undressed, his wig came askew, revealing his own coal black hair. 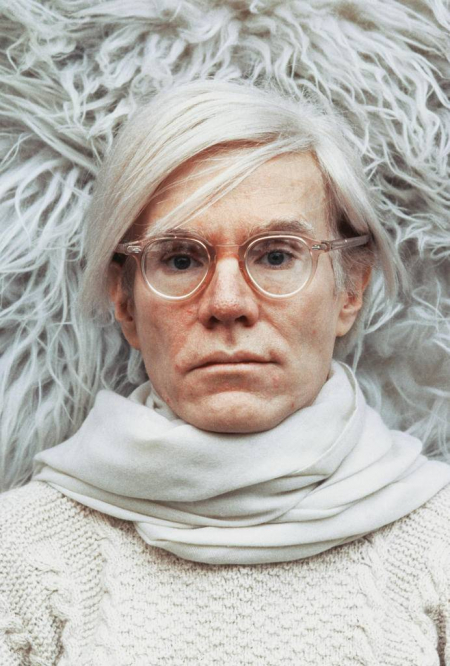