Drawing inspiration from the practical world of aviation and the futuristic vision of science-fiction films of the 1920’s -1940’s, Spacecraft is a hybrid frame celebrating the past, present, and future of flight and exploration.

As a frame, Spacecraft is built around three fundamental concepts: hybridization, engineering, and tradition. As man’s journey into aviation began to evolve from kites, to hydrogen balloons, to the aeroplanes we know of today, so did his imagination.

By the latter part of the 20th-century advances in engine technology and aerodynamics made controlled, powered flight possible for the first time. The world awoke to the new possibility of experience never otherwise seen by the masses. “Airships” the first large scale hot air balloons such became the standard for long-distance flight revolutionizing man’s perspective of the world. At the same time these advances in technology sparked the imagination of creators and filmmakers already dreaming of worlds beyond our knowledge. Science-Fiction films burst to life on the screen offering a new kind of liberation from our present world and it’s constraints. Spacecraft combines subtle shape of a small aviator fused with a highly engineered round- a shape commonly found in eyewear from the 20’s, 30’s and 40’s 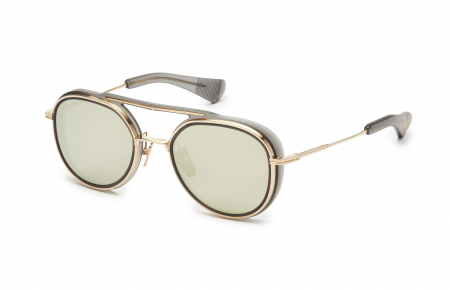